One of the hopes of the Playing Fields Association is to form a History Group which will dig into our Community past. A circular will be produced to in the Autumn to help start the Group. We are sure there are photos and information from our past  in people’s attics and garages – we are particularly interested in the anything about Rhewl station, Rhewl Quarry and railway, Rhewl Church, Rhewl Chapel, Capel Rhydycilgwyn, Clywedog, Cae Bricks, Melin-y-wern, Melin Meredith, Rhydycilgwyn and mill, Llanychan Church, the garage on the main road, Rhewl School, Bachymbyd Fawr, The Grange, Plas-y-ward, Plas Einws, Bryn Caredig, Buarthau, Rhydonnen, Llawog, Llanynys Church, Plas Llanynys, Pont Rhyd-y-gwaed and the Civil War Battle in the locality etc. There is also a Bronze Age Round Barrow in one of the Plasyward fields to investigate.

We have had an interesting piece of information from Huw Davies, Maes Derw who spotted an  interesting article on a history website about a battle in Rhewl in 1118 it reads

“In 1118 Hywel ap Ithel made war upon his neighbours, the sons of Owain ap Edwin, who were lords of the cantref of Dyffryn Clwyd. Hywel brought Maredudd ap Bleddyn, with 400 warriors from Powys, to his aid, while Gronw ab Owain and his brethren had the help of Norman knights from the lands of the Earl of Chester. A bloody battle was fought at Maes Maen Cymro, a mile to the north-west of Ruthin, in which Hywel and his forces won the day and Llywarch ab Owain was slain. But Hywel was severely wounded, and his death six weeks later turned the momentary victory into a real defeat.
(Footnote:) Maes Maen Cymro is a township in the parish of Llanynys and lies in the neighbourhood of Rhewl railway station.”
Source: J.E.Lloyd, A History of Wales, vol II, 1912, p.465-6.
In 1118, Hywel ab Ithel, lord of Rhos and Rhufoniog, and Goronwy, Rhuiddid and Llywarch, the sons of Owain ap Edwin and lords of Dyffryn Clwyd, fought a bitter battle where the sons of Owain and their supporters were defeated. Hywel died of his wounds forty days later.
Thomas Jones, The Chronicle of the Princes, 1955, p.103.
B.A.Malaws, RCAHMW, 29 August 2006 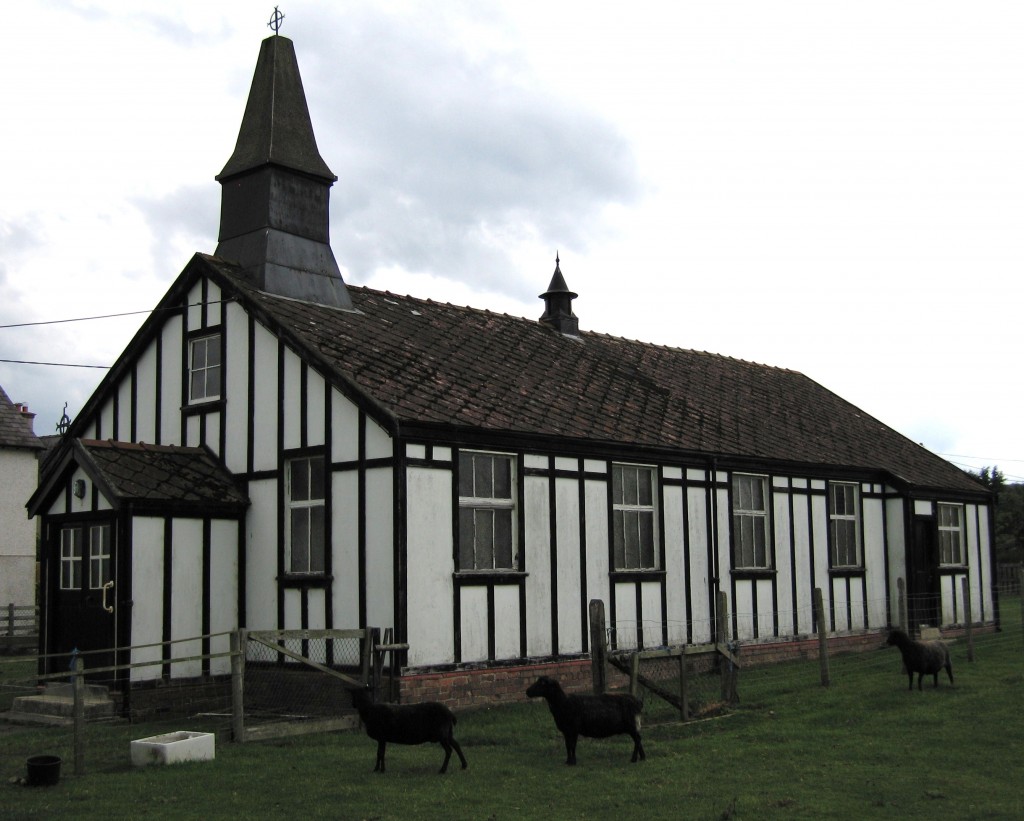 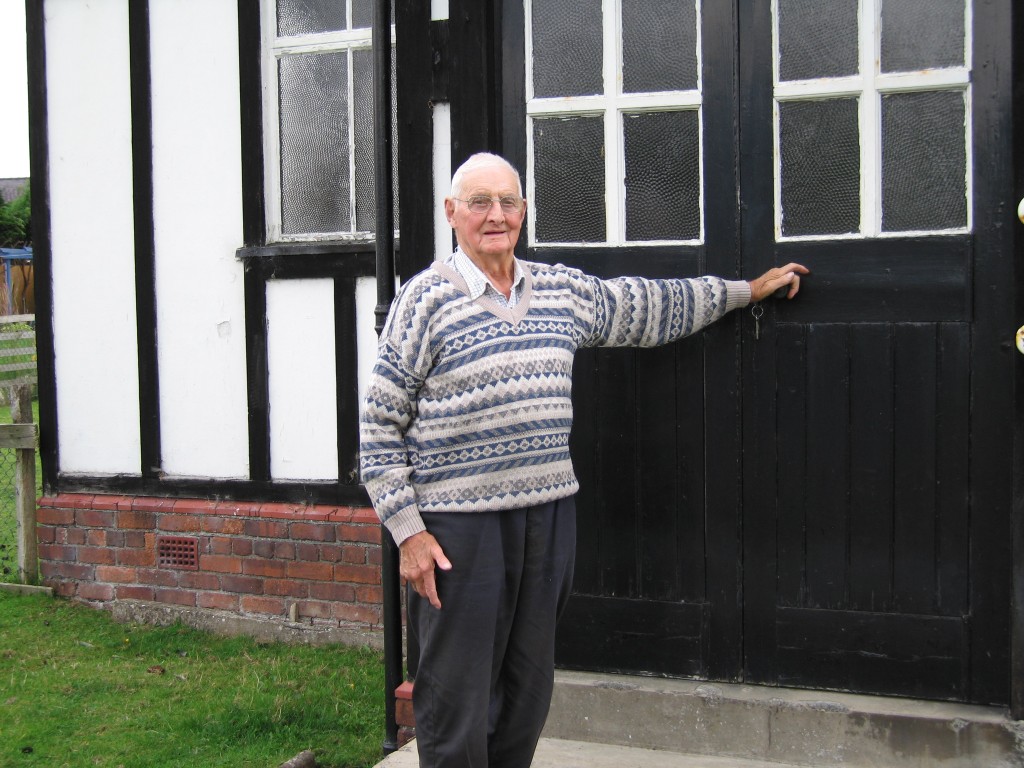 A Photo from the 19th century of Rhewl Station. This is a delightful scene of (presumably)the Station Master, Porter and Gardner with a passenger – this photo was acquired from the Clwyd Record Office. 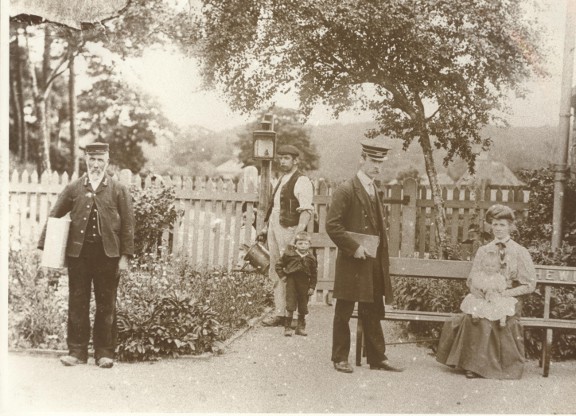 Rhewl Station in the late 19 century

The second is a post card containing  of a view of Rhewl from the station Bridge in 1945 – we are grateful to Thomas Burton Jones  originally from Tyddyn isa  but now living in the Midlands – the postcard was sent to his late mother Mrs Rosina  Jones whilst in hospital. The building in the centre of the photo is Ty Isa Farm with Rhewl  Shop and the Grove just behind 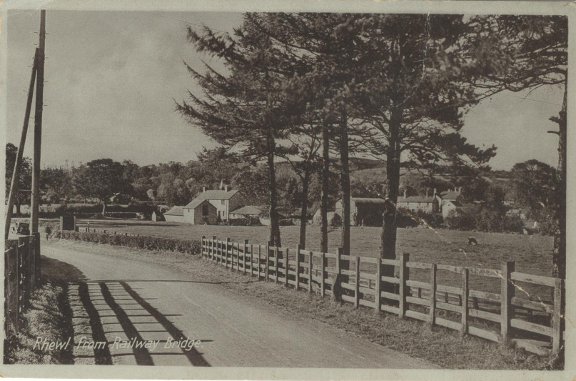 A view of Rhewl from the station Bridge in 1945

Below is the Rhewl Quarry train which used to shunt wagons of Lime from the Quarry to the Ruthin- Denbigh main line. In the background one can make out the Quarry cottages. 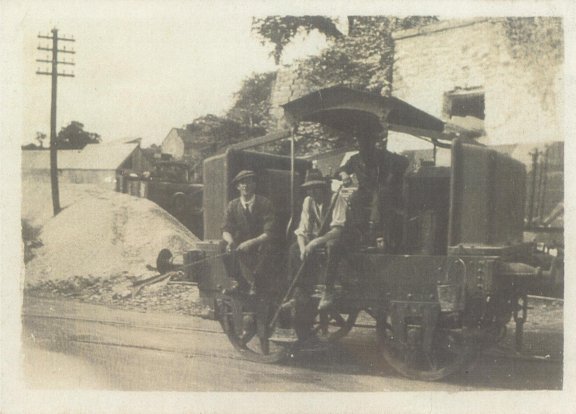 The old engine at Rhewl Quarry

The oldest photo of the Drovers we have come across 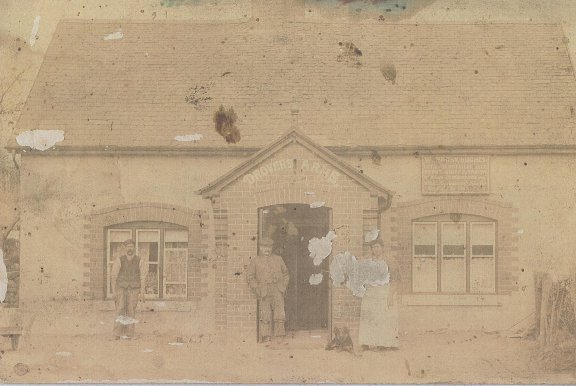 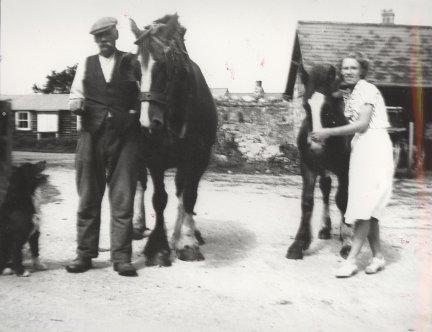 Thanks to Roger Lewis Jones for these last three  photos